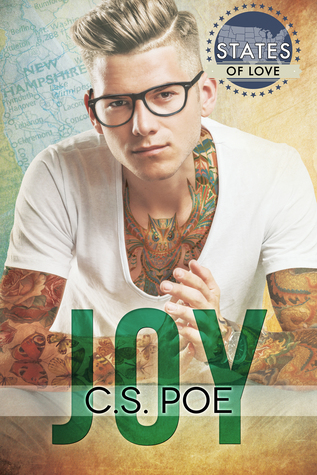 Down on his luck is Gideon Joy’s default state. He doesn’t know why he expected anything different on his cross-country trip, but not surprisingly, the hits keep coming—literally this time. Gideon strikes a moose with his car in New Hampshire, not only totaling his own vehicle, but damaging one belonging to local construction worker Silas Bright. He has no choice but to stay in Lancaster and take a job that’ll pay for the repairs. And in a town so small, Gideon’s always running into Silas. What starts as annoyance between them soon blooms into something much more romantic. But when Gideon’s notorious bad luck rears its head yet again, how many disastrous dates will Silas be willing to weather before realizing Gideon’s not worth it?

Despite Gideon’s desire to remain in the quaint community that has accepted him as one of their own, past fears of inadequacy threaten the very joy he left Los Angeles to discover. If he’s to find a happily ever after with Silas, Gideon must learn that sometimes it’s okay to not be the best. And true happiness might be waiting in a small town nestled among the great White Mountains.

States of Love: Stories of romance that span every corner of the United States.

Gideon Joy is unlucky, or so he believes. He got his life all wrong in California and set off on a road trip to the other side of the country and back. He almost made it…he swears the moose jumped out in front of his car and made him hit the truck! The truck’s driven by a mountain of a man, Silas Bright. At first, Gideon doesn’t really ‘see’ Silas since he’s gruff and quiet! Soon, though, he realises Silas is a good guy, like everyone says he is, and he’s HOT! Gideon’s gay, and he really hopes Silas is too, since he now has to stick around the small town of Lancaster, New Hampshire until he’s found a job and earned enough to pay to fix both cars. Luckily the town has some great, accepting, residents and Gideon comes to think of it as home.

Gideon’s bad luck follows him around like a shadow. The B&B double books his room and he has to move out, and he’s picked on by two homophobic drunks, among other things. He does have two lucky breaks, George at the Eatery gives him a job and Silas, who turns out to be George’s brother, gives him a place to stay. But Gideon’s bad luck persists when his dates with Silas turn out to be a string of disasters. Surely Silas won’t want him now? Gideon is convinced he’s ruined this part of his life too.

This was a really fun read. It’s short but sweet, and I really liked the characters of Gideon and Silas right from the start. For such a short book the characters are well defined and lovable. Although the plot is not complex, it’s cute and satisfying, and there’s plenty of humour in there too. I loved the way Gideon tried to win Silas by turning around his boring eating habits. Who eats peanut butter and marshmallow, or Fluffernutter, sandwiches for lunch every single day? Well, Silas did until Gideon makes him a fish taco! I had to laugh out loud when Silas’s workmates bet on whether he’d kiss Gideon.

The ending was predictable, but this is a short story and anything more complex wouldn’t have been right. I would recommend this to anyone who wants to while away a few hours with a good story.