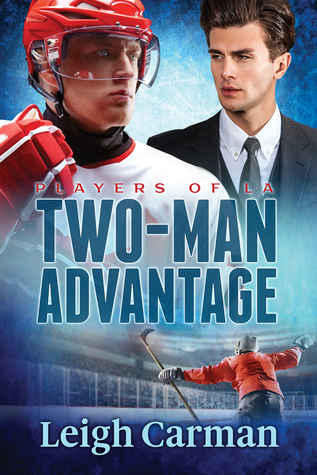 A hockey star skating on the edge of a catastrophe.

A PR specialist so adept, he’s called “the Fixer.”

Working together will be the biggest challenge of both their careers.

The LA Vikings hockey team is fed up the violent outbursts of its huge, intimidating enforcer, Viktor Novak. Hounded by a homophobic and domineering father, Viktor takes out his frustrations by spilling blood—on and off the ice. Now he has one last chance to clean up his image, or his career is over.

That’s where Bowen Miller comes in.

Bo has taken on the hardest cases and succeeded—by micromanaging every aspect of a client’s life—at the expense of his own happiness. But in the stubborn, hot mess that is Viktor, Bo might have met his match—both in and out of the bedroom. One man is out of control, and one controls everything. But when sex and attraction come into play, those roles are open to negotiation.

Viktor Novak is a hockey player, violent on and off the ice. At 23 years old, he’s fed up that everyone controls his life, he can’t be who he wants to be, his father is an abusive man, who controls his life and belittles him. The fact that Viktor is gay, in the closet and can’t have a normal relationship without being outing, doesn’t help either.

Bowen Miller is hired by Viktor’s team, to clean up his image and make him respectable for the sponsor, press, and public. Bo controls every aspect of his life and refuses to let anyone take charge of him.
So, when he meets Viktor, he has to face a big challenge, tame the beast who attracts him like no one else.
I liked this book.
I loved Vik, he broke my heart, he suffers so much and so deeply, he made me cry.
Bo is perfect for him, they complement each other, Vik, needs to be in charge in the bedroom, it’s the only domain where he can be in charge. Bo didn’t know that he needs to be controlled by someone else until he met Vik. Each one comforts and appeases the other.

The feelings between them aren’t properly developed in my opinion, It’s a game of power between them during all the book, who controls who, until the ultimate fight when they broke apart. And suddenly, they talk about love. It was a little weird, because except for the lust and the physical attraction, there’s no romance at first, not at all, even for us, the reader, we don’t read how Vik feels for Bo and vice versa.

So when they talk about love, I was a little surprised.

Anyway, it doesn’t spoil the reading at all, and Vik and Bob are so adorable that at the end we don’t care how their feelings are developed by the author.

It was a pleasant read with a beautiful happy ending, and I liked it.