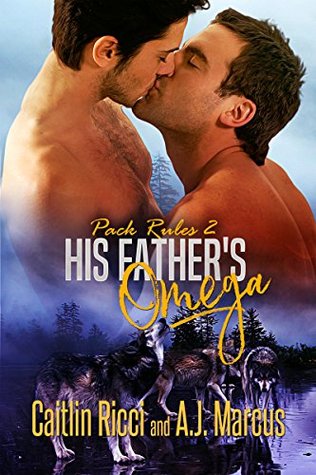 Jacob wants nothing to do with his father, but he’s not fitting in with his birth pack anymore. When his father sends for him, Jacob’s pack urges him to go, giving him little choice in the matter. Colorado is a far cry from Boston, and he just wants to find somewhere he fits in, wherever that may be.

Miles is finally settling into life with a good alpha at the helm. He’s learning what it means to be an omega and that he has a definite place in the pack. Jacob is a complication in ways he doesn’t understand. He wants to be close to Jacob, but he’s also afraid of what that means.

His Father’s Omega by Caitlin Ricci and A.J. Marcus is the second book in the Pack Rules series. This book is so much better than the first book. The pacing’s great and the story never felt rushed like the first book. The storyline was believable, and so were the characters. His Father’s Omega’s about Alpha Harlow’s son Jacob and the pack’s omega Miles. I liked getting to see how the “haram” is adjusting under the new Alpha. They still have issues that they’re working on, and I was glad that the authors didn’t rush Miles into any situations that he wouldn’t have been capable of handling after the trauma that he’s been through. They didn’t have him miraculously get better just because he found his mate which made the book believable. I liked how Jacob has to take things slow and works to win Mile’s trust and respect.

Jacob’s on his way to the Glenwood Springs pack, his father’s pack, in Colorado after basically being kicked out of his mother’s pack in Boston. They made him leave after Shamus, the pack beta, died in a fishing accident and they didn’t want to put up with him moping and fighting anymore. Jacob looked up to Shamus as a father figure after his father abandoned him and his mother when he was an infant. He isn’t sure how to feel about living with his father and has a chip on his shoulder because of it. I loved that Shamus taught Jacob how to scrimshaw. Jacob and Nathan (his father’s mate) have a lot of hostility between them, and it doesn’t help that Nathan treats Jacob like a child that can’t be trusted. I did like that Jacob’s from a healthy tribe and can help with describing what an omega’s duties are to the pack.

Miles’ excited but apprehensive about all of the new people that have been joining the pack. He’s still trying to figure out what it means to be an omega and have a position in the pack. He knows that he can calm the pack members through touch, but he figures that there has to be more to his job. When Jacob shows up to join the pack, he’s drawn to him and wants to help take away his sadness and pain. But at the same time, he isn’t sure that he can trust him to respect his boundaries.

I liked getting to see Jacob and Miles find their way together and take things slow. I can’t wait to see what happens in the next book in the series. I’m hoping that it will be just as good as this one was.

**** The ARC was provided by eXtasy Books. My review is an honest opinion of the book ****