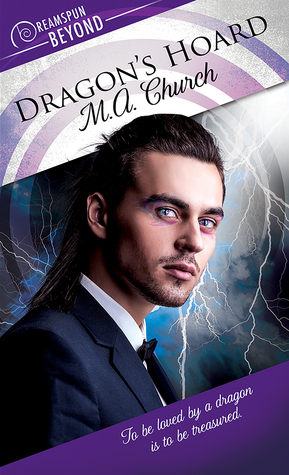 To be loved by a dragon is to be treasured.

A hundred years ago, werewolf Alpha Montgomery took a risk driven by desperation—he borrowed money from the ancient dragon Warwick Ehecatl, putting up the pack lands as collateral. Now the debt is due, and dragons don’t forget—or forgive. Warwick demands Montgomery’s son, Avery, and three businesses as compensation. As an Omega, Avery knows he is basically useless to his pack, so he might as well agree. He soon has second thoughts, though. Warwick is fearsome, and he’s free to do as he likes with Avery.

Warwick knows his race’s reputation, and he even admits some of it is deserved. But he’d rather cut off his tail than let his innocent mate’s light go out. It won’t be easy, but buried deep, there’s something between them worth safeguarding.

This was my first read by this author, and I bit myself up that I waited this long.

This book was a one continuous read, and I couldn’t put it down until the very end.

Avery is the son of Alpha Montgomery, who, hundred years ago, took out a loan from the very ancient dragon. That’s kept secret until the 100th birthday of Avery, when he officially becomes a man. Now Avery is an omega to his father’s disappointment. He has 5 older siblings but they’re all females, and the pack rule doesn’t allow females to become an Alpha.

Avery is nervous about his birthday party, so he hides in his room till the very last minute. There are a lot of suitors, to Avery surprise, present at the party. Omegas are valued in a pack because of their vulnerability, but they are not taken seriously at all. Avery was treated like a damsel in distress all his life, and that infuriates him. So he’s not looking forward to a mate, when he will probably be treated as an empty-headed trophy mate.

Warwick Ehectal is a thousand year-old dragon. As all dragons, his hoards are vast, full of unimaginable values. But one thing is missing. Warwick feels lonely, but he doesn’t really realize because he’s busy, or that’s what he says. So when Alpha Montgomery needs to pay his debt, he shows up, just a few hours before the alpha’s term ends, at his son birthday party, purposely.

Dragons are not bargaining. When the contract is signed, the terms must be fulfilled. But that thing will change when Warwick lays eyes on Avery. Of course, Alpha Montgomery doesn’t have the money he owes, but the dragon is ready to make a deal: the alpha’s most profitable business and his son Avery.

The story was surprisingly sweet, romantic and was nothing I imagined.