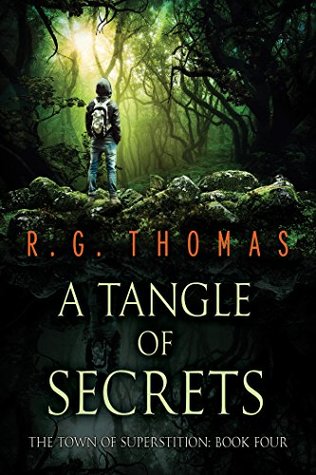 Sequel to The Battle of Iron Gulch
The Town of Superstition: Book Four
Thaddeus and his family and friends have returned from Iron Gulch and Thaddeus’s summer of magical awakening to a very different life. For one, he has both his parents for the first time, though his mother is still haunted by terrors and powers she can’t yet control. Teofil, Thaddeus’s gnome boyfriend, is consumed with finding Thaddeus’s evil uncle Lucian and answers about what happened to his brother, and he spends his days sequestered in Leopold’s library, pouring over the old wizard’s journals. When Thaddeus starts school and makes friends Teofil doesn’t like, there’s tension between them for the first time ever.
Thaddeus’s problems don’t end there. It’s harder and harder for him to conceal his magic, especially when facing the school bully. He’s lost, confused, and lashing out, and for once, he finds no solace in those closest to him. His enemies are hiding in plain sight, biding their time, until the Bearagon reappears and instigates a fight not everyone will walk away from.

After the battle of Iron Gulch, Thaddeus and his family and his friends have returned to Superstition.
Thaddeus and his father have succeeded, they found Claire, Thaddeus’s mother, and freed her from her curse. Claire needs some time to adjust to her new life. Thaddeus needs to return to his old life, meaning go back to school. But this time everything is different for him, he’s no longer the lonely boy he was, he has a boyfriend, he’s a wizard and his mother is back home.

Between Teofil’s quest to find his brother Fetter, the bully at school who harasses Thaddeus, and his new friend Andy, Thaddeus lives through a lot of changes and he feels more and more like an outsider from everyone, including his family.

But when the past comes back to hurt them, Thaddeus will have to make a choice and find the truth in all the lies.

It’s the final book of this series, and it’s my favorite.
Thaddeus has to come back to school, deals with a bully too, and starts to have dark and mean thoughts. He talks back to his parents, fights with Teofil and he’s angry all the times…
At first, I thought, nothing is wrong with him, he’s just a teenager. But the more I read, the more I understood that there’s something really wrong with him. And I had to wait for the end of the book to have my suspicions confirmed or not.

This story was more focused on Thaddeus and his family. It was interesting, and I enjoyed it a lot.
I really liked this book and how the author describes Thaddeus’s change, he makes a great metaphor between magic and the change all teenagers go through when they hit puberty.
The plot was good, and we have a real closure at the end, no more secrets, suspicions, nothing left.

I’m a little bit sad to say goodbye to them, but it was a beautiful final chapter.

4 OptimuMMs for All of them.

***The ARC was provided by Ink Harmony . My review is an honest opinion of the book ***