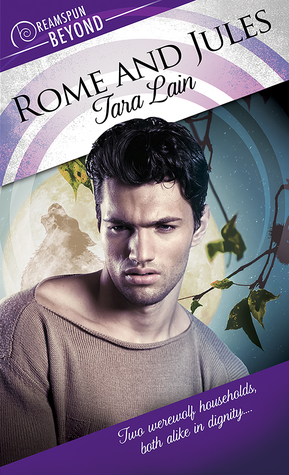 Two werewolf households, both alike in dignity….
Rome Siracusa, youngest son of the alpha of the nouveau-riche Siracusa pack, wants to be a faithful son and pack member, but he’s got two big secrets. One, he’s blessed with enhanced hearing, vision, strength, and the ability to shift at will. Second, he’s gay, a fact he can’t admit to his deadly homophobic father.
Rome crashes a party at the mansion of his pack’s greatest enemy, the ancient, pure-blooded Havillands. Jules, the gay son of the drunkard alpha, is being married off to a rich entrepreneur. Smitten and moved by the beautiful male’s plight, Rome tries to find a way to save Jules—while digging himself deeper into pack politics and navigating his own arranged marriage. Secrets climb out of the caves as the werewolf gods speak through the mouths of their children, and the two great families clash, suffocating the hopes of star-crossed lovers.

Rome and Jules is a gay paranormal modern version of the classic Romeo & Juliette by Shakespeare.
No need to tell you much about the book than the blurb and the older version already did except the HEA.

Tara Lain did an amazing job with this version.

Rome and Jules are beautiful, strong and very powerful. Rome is a pure Alpha, stronger than his father, but he hid it from everyone except his grandfather Lawrence. Jules is also a pure Alpha, and he also hides it from everyone. Both of them know what it means to be a pure Alpha. The pack and their fathers will have high expectations for them.

I loved how the author wrote the characters. Rome is very strong and straightforward with Jules. At first, Jules seems sensitive and fragile. But he’s resourceful, very smart and powerful.
I had a great time with this story. First, I loved the original play by Shakespeare, second, I love the Godfather (my favorite movie of all time ever, like the number 1 and I also love the book by Mario Puzo). Here the author did a perfect mix between the two of them, and personally, I also love the Romeo + Juliet with Leo (one of my fav movies too). I had the feeling of reading a mix of all those versions and masterpieces with Tara Lain’s touch.

She did a good job because she didn’t only write a gay modern version of the original play, she completely appropriated the book to herself. It’s a difficult exercise to do that, it would have been easier to follow the original plot, but no, she just took the “skeleton” of the story and recreated it in her own way. She adapted it to our modern time, and what it means to be a gay man in our society with all the prejudices. She did it brilliantly, with humor, and a few winks to the original version.

I also enjoyed the writing. It was fluid, fresh, dynamic. I followed the plot easily, and get attached to the characters rapidly. Actually, I loved them so much that I didn’t want to let them go at the end of the book and kind of wish for a sequel.

I recommend this book. You’ll have a great time with the characters and get a beautiful smile at the end.

4 OptimuMMs because Love is Love.

One thought on “Review: “Rome & Jules” by Tara Lain”