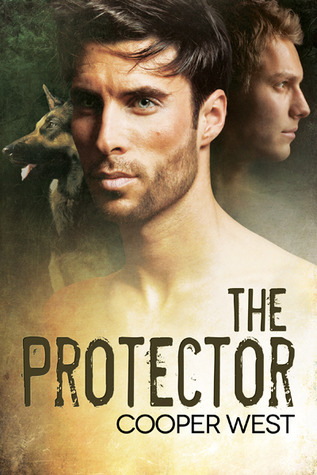 Guardsmen are always matched in a bonded pair. The Protector can shift into a weredog, and the human partner is his Handler. They are incredibly rare and highly valued, but people also fear them for their mystical abilities. No Protector in living memory has outlived his Handler—until Alex Taylor.
Now a widower, Alex lives a lonely half-life and faces day after day of grief with no hope for happiness in the future. When he unexpectedly bonds with the young and vibrant Handler Marcus Stephanek, Alex is angry and unwilling to leave the memory of his former Handler behind. He pushes Marcus away and tries to distance himself from their bond. But then a mysterious villain who has been secretly shadowing Alex for years sets his plan in motion. Alex and Marcus must learn to trust their bond and love each other, or risk not only their own lives but the lives of those closest to them

In a world where a bonded pair is rare and if the human dies, the weredog shifter soon follows is the norm, until now. The Guardsmen consist of a human known as the Handler and a weredog known as the Protector. A bonded pair is extremely rare, and with the abilities they possess, the pair are also highly feared. When a weredog Protector loses his bonded mate and doesn’t follow suit it, creates a lot of questions and the length some will go through to find the answers leads the characters in a quest to find answers that ultimately leads them in a fight for their lives.

An investigation gone wrong leaves Alex not just alone but without the other half of his soul. Alex is a Protector. He’s always been unique, and the Guradsman scientists have been poking and prodding him since he was a kid. When he found his bonded mate and Handler, Theo, he fell in love, and that love ran soul deep. Every day after Theo died Alex wanted to follow. Being a Protector without a Handler meant that he was treated as a pariah and most disturbingly, useless. Being a guinea pig for the Guardsmen scientists is all he knows now. When he’s scheduled back at the lab something unexpected happens that leads to an entirely new set of problems that Alex isn’t even remotely interested in dealing with.

Marcus has done everything right his entire life. He has more certifications and qualifications than any other Handler. All he’s ever wanted was to soul bond and finally follow his dreams. At Marcus’s age, most Handlers have already found their mate. As Marcus begins to lose hope of ever finding his Protector, the impossible happens. Marcus knows all about what happened to Alex and Theo, everyone knows. So when a certain smell has him following his nose to the widowed Protector, Alex, he’s in for a world of surprise. Marcus wants Alex, but Alex is still grieving and loathes the idea of Marcus being his Handler. The pain of being rejected takes it toll, and Marcus has to find a way to break through the wall Alex has built around his heart.

This book is insane. In the best way. I absolutely loved it. It was fast-paced and emotionally jarring. I don’t have any nail beds left after reading this. I couldn’t even contemplate putting it down. It’s one of the best books I’ve read this year. Alex had me crying from the beginning. Poor Marcus had me just as emotionally invested. The plot was gripping, and I was actually surprised at the villain and how deep the deception went. I highly recommend this book. I want more. I need more. This author has made a fan out of me.