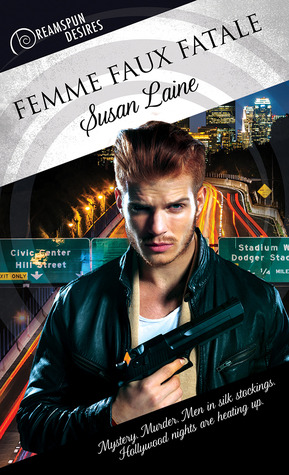 Mystery. Murder. Men in silk stockings. Hollywood nights are heating up.
Hardboiled Los Angeles PI Cain Noble is hired by wealthy and gorgeous Camille Astor to find her husband and a priceless work of art, both of which have disappeared.
At the nightclub owned by Mr. Astor, Cain encounters the mesmerizing Lily Lavender, who has the body of a goddess and the sultry voice of an angel—but is really a young man named Riley who attracts trouble like a magnet.
What’s a private dick in the vein of LA’s bygone era and a cross-dressing burlesque starlet to do when faced with the hidden decadence and lethal dangers of the Hollywood Hills? They have their work cut out for them because they haven’t even scratched the surface of an elaborate scheme more twisted than anyone could ever have imagined.

Femme Faux Fatale by Susan Laine is the seventieth book in the Dreamspun Desires series. I knew that I wanted to read this book when I read the blurb and it said men in silk stockings. I love a good cross-dressing book and add in all of the twists and turns of a murder mystery, and I was entertained from the start of the book to the end. And there were quite a few twists that I didn’t see coming. The book had a 1940’s feel to it. I kept picturing a Humphrey Bogart movie as I was reading this book. Fans of Noir films and old black and white PI movies will greatly enjoy this book.

Cain Noble is a hardboiled Los Angeles PI who’s hired by the wealthy and gorgeous Camille Astor to find her husband and a priceless work of art, both of which have disappeared. He has a no-nonsense attitude and drinks a little more than is good for him which fits with how private investigators were portrayed during that time period, so the author did a great job of fleshing out and developing his character. I liked him a lot. I liked watching him try to figure out what was going on, especially when he kept getting turned on by what he thought was a woman. I liked when he finally figured that one out. I really enjoyed the chemistry between Cain and Riley, aka Lily Lavender, the cross-dressing burlesque starlet.

Cain and Riley will have their work cut out for them when they are faced with the hidden decadence and lethal dangers of the Hollywood hills because they haven’t even scratched the surface of an elaborate scheme more twisted than anyone could ever have imagined.

I recommend this book to anybody that likes to read murder mysteries with a PI and a cross-dressing burlesque dancer, if you do then this book is just what you are looking for.