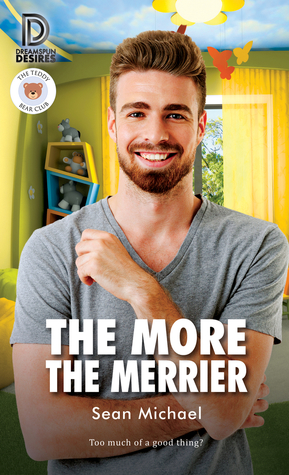 Too much of a good thing?
When Logan gets the call about newborn triplets in need of a home, he steps up, realizing too late the daunting task he’s taken on. He’d be lost without the men of the Teddy Bear Club—especially Dirk.
He even offers to spend spring break at Logan’s home, helping him and the babies settle in. Dirk loves being a dad, and he wants to help Logan find the same joy. It doesn’t hurt that they enjoy spending time together.
Before they even realize it, they’re settling into a routine… becoming a family.
Falling in love.
But their new bond is about to face the ultimate test. Will they come through and realize that with love, there’s no such thing as enough?

I love reading books by Sean Michael. Whether they’re his BDSM books, like his Personal Best and Iron Eagle Gym series or his lighter and fluffier books, like The Teddy Bear Club series, I know that I will always get an entertaining book filled with loveable characters and sexy good times. It’s rare that an author can pull off both well. The More the Merrier is the second book in The Teddy Bear Club and the eighty-third book in the Dreamspun Desires series. I did review the first book in the series, The Teddy Bear Club, and loved it. I have eagerly been awaiting the next book in the series, and it did not disappoint me.

The second book is about Logan, who’s an attorney and has secretly been taking the parenting classes needed to be able to be a foster parent. He was hoping to foster older kids but was offered a set of newborn triplets, two boys and a girl, to foster instead. He instantly fell in love with their picture. He has an older daughter that he helped raise. He was a sperm donor for one of his friends who wanted a child, and he wanted to be a dad to her also. She’s now ten and gets to decide who she wants to stay with her mom or her dad. Logan is frazzled over caring for three babies, but with the support of the other single dads that he’s made friends with during the twice-weekly daddy-and-kid play days at the Roasty Bean, he knows that he’s in good hands for any advice or help that he needs. Logan is also the godparent to Dev’s child, Dylan. The first book was about Dev and Aiden. So there are cameos by these two characters throughout the second book.

Dirk is the other single dad in this story. He has a preschooler named Melinda who loves babies. Dirk has had a crush on Logan but hasn’t done anything about it. Dirk is especially helpful with helping Logan and his new babies since he’s great with kids and has the week off to help Logan get a routine going and find a nanny if he needs one. But after living together for a week and living as a family, will either of them want to go back to being a single dad or will they continue with their new found relationship and family life?

Although this story is about a different couple than the first book in the series and can stand alone, the second book is best enjoyed after reading the first so that you can get the full enjoyment out of everyone’s interactions at the Roasty Bean.

Another home run of a story from Sean Michaels and I eagerly await the next book in the series to come out.