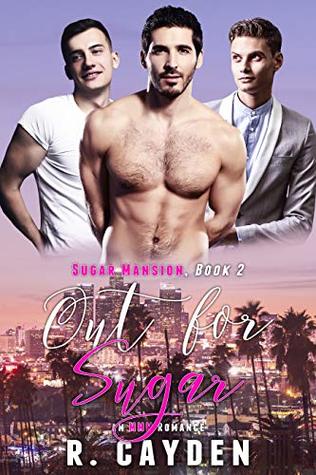 Troy Hart is the hottest leading man on daytime television… and he hates it.
There’s a reason it’s called straight acting, after all. But don’t be fooled by the macho swagger and bearskin rugs.
The heartthrob’s heart just isn’t in it.
For how good I am at strutting around and flexing my muscles, you’d think I enjoyed it. But the only worse fate I can think of is living through another tabloid scandal by coming out.
And that’s exactly what I see when I look at Elliot and Vincent. One massive tabloid scandal.
Famous gay sugar babies? Social media darlings? No way. Those guys are drop-dead beautiful, and they run around Los Angeles with the hottest executives and billionaire daddies in town.
I mean, seriously, those twinks have their own hashtags!
Me, getting with them? It would be the biggest scandal Hollywood has seen in years. I absolutely cannot fall for them. I cannot fall for their pouty lips, and their delicious laughs, and their beautiful, wild, unforgettable love…
Out for Sugar is the second book in the Sugar Mansion series. It can be read alone or as the sequel to Sugar for Two. An MMM romance, it features two sassy sugar babies, one handsome and kindhearted soap opera star, and a wealthy dom with a mysterious past. Hide from the paparazzi, it’s Sugar Mansion time!

Out for Sugar is the second book in the Sugar Mansion series by R. Cayden. I didn’t read the first book in the series, and I think that might have been a mistake. I think if I had read the first book, then I would have been more invested in Elliot, Vincent, and Don. I would know how they got together and how far they have come in their relationship and why it’s so important to Elliot and Vincent to convince Don to sign the deed of the mansion, they are living in, over to them so that they own it.

That seems to be the main focus of the book, and I’m not sure that I got why it was such a big deal for them to get the deed. As a result of trying to figure out that special something to give to Don to get the deed, they end up pursuing the hottest leading man on daytime television, Troy Hart, who may or may not be straight.

Elliot and Vincent seem to be doing great in their relationship together and with Don. They still have their other sugar daddies that they see and their other friends. They will do anything to own the mansion that they live in, and they think that if they can obtain Troy and give Don a show that it might be enough to get him to give them the deed. Vincent has had a huge crush on the daytime leading man and gets a little stalkerish in trying to meet the guy by watching the burger joint that he loves to go to. He ends up meeting him, and it doesn’t go over well. Elliot ends up meeting Troy while accompanying one of his sugar daddies that’s a producer to the daytime television awards and they hit it off. Troy shows up at the mansion to ask out Elliot, and Vincent opens the door. So now Troy knows that Elliot and Vincent are boyfriends. They convince Troy to go on a date with both of them since Troy isn’t out and the sugar babies get noticed because they have such a big online presence, they decide to go in disguise. Which goes great until it doesn’t, and pictures are taken of them, and Troy has a meltdown. Troy will have to decide how he wants to deal with the fallout. Does he risk his job and his co-star’s job by coming out finally or does he come up with a good excuse for being with two sugar babies? And what will he do when it comes out that Vincent and Elliot didn’t pursue him because they liked him at first but because they wanted the mansion.

I liked Troy. He has his issues and past scandal in his family that he’s trying to make up for. It was his father’s scandal who was also a daytime leading star. As the leading daytime star, Troy has kept his sexual preferences to himself and his costar. He doesn’t want to cause another scandal in the family, but not being true to himself is a huge weight on his shoulders. So when he meets the sugar babies, he finds himself helpless against his desires even though he knows that he shouldn’t see them.

The end of the book seemed kind of rushed for me. Once he makes up his mind about what he wants to do, Troy then goes for it. No more angst about causing a scandal or losing his job and I’m going to assume that there will be another book in the series because Vincent and Elliot and now Troy still don’t have the precious deed to the mansion. Don is still a mystery, and they still have no idea what they should tempt him with next to get the mansion. I guess I will have to read the next book to see what shenanigans they come up with next to tempt their sugar daddy.