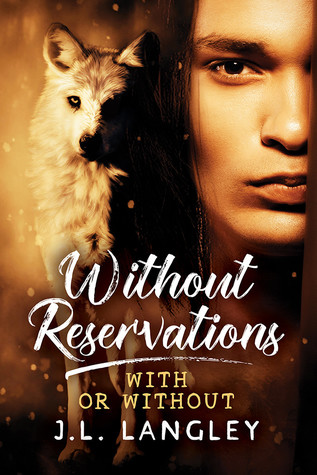 Sometimes love catches you by the tail.
Native American veterinarian—and werewolf—Chayton Wilson dreams of a fair-haired mate. However, he’s shocked to find his mate is a man. He’s not quite sure what to do with a male mate, but he’s more than willing to find out.
Keaton Reynolds wakes up in wolf form and finds himself with a mate. He’s instantly attracted, but not thrilled to find out the man is supposedly straight. A past relationship where his partner denied being gay left a bad taste in his mouth. Keaton wants to make a break for it and pretend he never set eyes on Chay—but Chay is not ready to let him go.
Together they work to battle prejudice and solidify their shaky relationship. When a power struggle in Keaton’s pack threatens Keaton’s life, the two men must quickly learn whether they can depend on each other.
Second Edition
First Edition published by Samhain Publishing, Ltd., October 2006.

Chayton Wilson is a native-American veterinarian and a werewolf. Since the age of 4 yrs old, Chay knows that his mate will have golden hair and eyes the color of the sky. One day, a pack member brings him a wolf who’s been hurt. A beautiful white werewolf who happens to be his mate… a male mate.
Keaton Reynolds is a history professor and a werewolf. When Kea wakes up in his mate’s car, he’s surprised but happy, until he realizes that his mate isn’t gay.
Keaton tries to get away from the situation, but Chay refuses to let his mate go, and he’s ready to win him over despite everyone and everything.
Without Reservations by JL Langley is book 1 in the series With or Without. It was a good start for this series, and I really liked it.

Chay has wanted a mate since he was 4 years old. So he’s ready to have a mate, but he wasn’t ready to have male mate. Chay always defined himself as straight until he meets Keaton. After the messy beginning between them, Chay is more than ready to woo Keaton. I loved Chay. He’s smart, funny, and very open-minded. He refuses to give up on Keaton and their future, and he’s ready to fight for them. I loved that he stood beside Keaton against everyone including his own mother or his best friend.

Keaton is a brilliant 25-year-old professor. Because he seems younger than his age, Keaton was always compared to a twink. He was traumatized by his ex-boyfriend who was in the closet. Kea refuses to live that situation again with Chay, but Chay fights back hard to have his chance. I adored Keaton. Everyone thinks he’s a little twink, but Kea is a powerful wolf—one of the most powerful in the shifter world. He refuses to use or abuse this ability, but he refuses to have people mistreating him. He’s fierce, proud and out. He has a temper too, but he’s also sensitive and has a sick sense of humor. I loved him.

Keaton and Chay are a perfect match. They complete each other perfectly. I loved that in their couple, there’s not a relation of power between them. They were meant to be.

The plot is mostly about Chay and Kea and how, day by day, they find their path together. But there’s also a subplot about a danger around them, especially Keaton. The secondary characters are awesome, and I can’t wait to read about Jack and Remi.

This book was good, funny, and well-written. It was a real good start for this series. The universe, plot, and characters were well-introduced, and I will be more than happy to read book 2.

It’s 4 stars for the vet and his little bit.