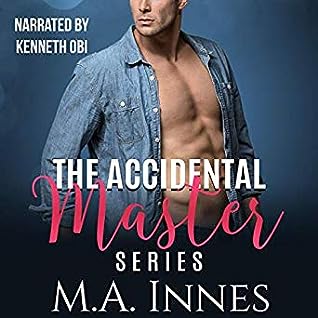 Length: 20 hours and 31 minutes
The Accidental Master: The Complete Series
When a mishap completely turns Jackson’s life upside down, he has two options: ignore the sweet email from the two subs looking for a Master or take a leap of faith and see where it will lead them. Luckily for pups Sawyer and Cooper, Jackson takes that leap and discovers that love sometimes comes in unexpected packages.
This boxed set contains the prequel to the series, the three main books in the series, and a bonus short where they take their first vacation as a family.
Family by Fate
The Accidental Master
Master by Choice
Master by Fate
Family in Love
205k+ words
Story Contains: M/m/m romantic content, mild BDSM, puppy play, and a bit of role playing between a naughty pup and his loving Master.

Narration: Kenneth Obi…umm loved his voice! He had a great flow and moved the story along wonderfully. I had goosebumps doing the sexy-times as he read. I’ll be looking for more of his narrations after writing this!

Books in the audio file:
Family by Fate (prequel)
The Accidental Master
Master by Choice
Master by Fate
Family in Love

Story: This is a kink book series…hands-down. The main theme is puppy-play, so be warned.
I was given the whole series in one audio file, so it took a bit to get through it (20 hours and 31 minutes), but wow, it was worth it. It was cute, playful, and had some HOT sex scenes that had me blushing at work!

Ugh, who do I start with? I loved all three of these guys. Cooper was an energetic guy and pup who stole some of the scenes with his cheeky behavior. But Sawyer stole my heart as the stable, quiet guy who just needed cuddles. Then Jackson, the Master who had no idea he had a hidden kink!

I laughed so hard listening to the debacle that was Jackson’s sister mixing up the Facebook adds. But he meets Sawyer and Cooper in the whole mess.

Sawyer and Cooper are younger guys trying to make their way through life with no family help. Sawyer’s dad had him out of the house the day after graduation after trying when he turned 18 during school, so he knew it was coming. Cooper had no idea and was blind-sided by his nasty parents, who acted like everything was perfect up to the minute they threw him out because of his puppy kink.

I think Jackson was the perfect option for them as a dog trainer! Cooper was just too filled with energy for anything less lol. The story is a gradual build into a wonderful three-way relationship. Even the boys had started as friends for years through high school before finding themselves as family and lovers after graduation. And they folded Jackson into the relationship in a very real and believable way.

Oh, and the sex scenes…there are a lot of them, and they’re smoking hot!

***I would like to thank the author for the privilege and opportunity of listening this ARC. My review is an honest opinion of the book ***