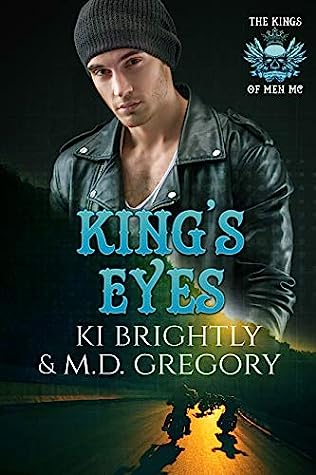 A Second Chance Becomes Trouble
After leaving his cheating ex and New York City behind, Mackenzie Byrnes wants to celebrate his new life and new teaching position in New Gothenburg. Only he ends up at a club in need of rescuing from a jerk who won’t take no for an answer. After that embarrassing mess, Mackenzie swears he’s on a man ban. His resolve lasts until he runs into the handsome bouncer who saved him, and then he hands over his phone number, hoping for a date.
A Stalker Who Can’t Look Away
Travis “Eyes” Hughes has two jobs—spy for the president of the Kings of Men MC, and nightclub security. When Travis saves a sexy blond from getting groped against his will, he gets the urge to follow him home to make sure he arrives there safely. One night of watching turns into a habit Travis can’t shake, and an impulse he won’t deny.
Lies Exposed
The closer Travis gets to Mackenzie, the sloppier he becomes. When his half-truths begin to catch up with him, all hell breaks loose with the Kings of Men MC, and Mackenzie finds out Travis isn’t who he said he was. With Travis’s lies exposed, a cop hot on his trail, and his brother in jail—he’s sure he’ll lose Mackenzie as well—but he might be surprised by the strength a certain kindergarten teacher possesses.

Narration: Let me say that the lack of stars is for narration here. Kaeomakana Tiwanak has a cute, young, twink-sounding voice, and if he’d read just the parts for Mackenzie (maybe slowed down the cadence a little) and there had been another narrator with a deep voice working as a team for this reading Travis’ parts, I would have given the narration 5 stars (hopefully). But unfortunately, it didn’t, so it was distracting at best. It actually caused me to miss parts that were important. Like a description of the characters. I’m going back to the ebook and reading the series. But I’ll be poking my head in to see when the next comes out to see if the writers sort this.

Story: I started with this book and that seemed to be okay. It is a series and should probably be read as such, so I’ll be reading it in order sometime next month. I even picked up book 1.5, King’s Rogue, to read as well. I think any fan of Sons of Anarchy should probably read this. It’s like an MM version! I loved the duel POVs idea. Its always a plus in my book, but like I said before, I would have really loved a proper voice for Travis.

I liked both main characters, Mackenzie and Travis. Whoever thought a stalker could be endearing?! LOL Travis is a stalker, there’s no other way to say it. But lol it works with the story, and I actually liked him a lot. His motivations are clear and written well. But he’s a bit distracted and it costs his brother instead of himself.

Mackenzie had some twists to his character that I also really liked. Yeah, he had a cheating ex in New York, but he also has family history with an MC back in California. That brings Travis to lie, and trouble ensues from there. We meet a few of the characters from the MC and I’d like to get to know them a bit.

Let me just say, these are NOT the cuddly non-criminal bikers! Well, they maybe cuddly, but they aren’t law abiding. It seems like a great story line with great characters…so I’ll be pushing the series in my to-be-read list!

***I would like to thank the author for the privilege and opportunity of listening this ARC. My review is an honest opinion of the book ***