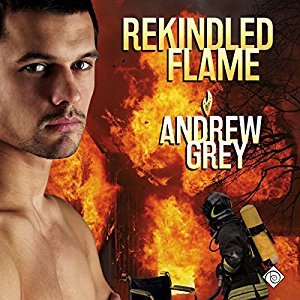 Firefighter Morgan has worked hard to build a home for himself after a nomadic childhood. When Morgan is called to a fire, he finds the family out front, but their tenant still inside. He rescues Richard Smalley, who turns out to be an old friend he hasn’t seen in years and the one person he regretted leaving behind.
Richard has had a hard life. He served in the military, where he lost the use of his legs, and has been struggling to make his way since coming home. Now that he no longer has a place to live, Morgan takes him in, but when someone attempts to set fire to Morgan’s house, they both become suspicious and wonder what’s going on.
Years ago Morgan was gutted when he moved away, leaving Richard behind, so he’s happy to pick things up where they left off. But now that Richard seems to be the target of an arsonist, he may not be the safest person to be around.

Narration: Michael Pauley has an amazing voice. I thought he read a bit too fast and emphasized things a bit too much where it wasn’t called for, so I marked this down by 1 star for that. However, it didn’t ruin any of the listening for me. He brought the heat to the sex scenes and kept me pulled into the story. He also gave Angus a very good Scottish brogue (my favorite being married to a Scot! lol). I can’t wait for the rest!

Story: I’m a huge fan of Andrew Grey as a writer, but also a pretty nice guy. Yeah, I fangirled at EPC a couple of years ago! I’m always looking for more Carlisle stories! So this was a no-brainer for me. This book was the first in the series.

In this book, we meet firefighter, Morgan, and ex-military disabled vet, Richard. These two were friends as kids, but Morgan had to move away and they lost touch. Years later, and they’re both back where they started…kind of.

Morgan is now a firefighter. His character doesn’t come across as a danger junkie, but he’s the one that goes into a burning building to get the people out. He thinks he’s happy with just his job and friends, but figures out soon that he’s lonely. When he’s called out to a fire, the small family there says that there’s a guy still in the house. Morgan finds him in a wheelchair and carries him out. Later, off shift, he does his normal hospital visit to see anyone he’s rescued.

Richard was the man in the wheelchair. At first, Morgan doesn’t recognize him. But when he does, he offers Richard a place to live while he figures things out. Grey wrote Richard’s character very well in my opinion. He’s fighting his depression and the many losses he’s had over the last couple of years. He was military and paralyzed in an attack. He lost fellow soldiers, but he also lost his parents on the way home from seeing him. He really loses everything. He’s living with a family of a service member that died in his unit, but the house was attacked by an arsonist hell-bent on hurting military families.

The story grabbed me and didn’t let go, even at the end! I was cheering for these two from the moment Morgan realizes the guy in the hospital bed was his husband when they were thirteen. It has a great flow and the relationship builds at a good pace. There are some great hot scenes, but there’s also a good sub-plot going on with the arsonist. And I’m not wasting a minute before I start book 2!