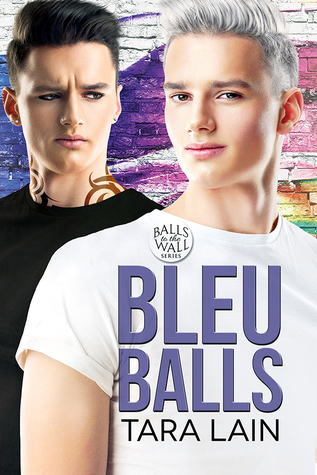 Double trouble. The McMillan twins, Robin and Bobby, are renowned for their talents—both as fine artists and for thrilling the various men who catch their eyes. As different in style and personality as their DNA is identical, they’re nonetheless best friends who divide and conquer, with Robin doing the serious painting and Bobby adding the sunny salesmanship.
But when their most important client decides Bobby must wield the paintbrush, the brothers revert to childhood tactics and switch places. Then along comes Micah, a handsome doctor who’s attracted to Bobby but invites Robin out to try to please his homophobic brother, and Paolo, the pain-in-the-butt client who thinks he’s wooing Bobby when he’s actually after Robin. Paolo harbors his own hidden pain that weirdly intersects with Robin’s, but pride and privacy conspire to produce what will either be a masterpiece—or end up as Dogs Playing Poker.

Bleu Balls is the seventh book in the Balls to the Wall series by Tara Lain. I’d eagerly awaited getting to read about the McMillan twins, Robin and Bobby, since meeting them in the previous book, Snow Balls, when they had a fling with JJ before he met Ryan. I have to say that Double trouble did live up to their name, but the book isn’t a bunch of threesome hookups between the twins and another guy. The book starts at the end of the hookup portion of their lives, and Bobby’s ready for a more series relationship with just another guy and not with his twin also. The book’s told from Robin, Bobby, Paolo, and Micah’s POV. So we do get to see inside of each guy’s heads and find out how they’re feeling. The book did get kind of confusing for me sometimes.

Robin and Bobby are both artists, but each has their own style and personality which are as different as their identical DNA. Robin’s the better painter but lacks people skills, and Bobby’s the better salesman with wonderful people skills and adds his sunny disposition to his brother’s dark and moody paintings. However, when Bobby comes down with a cold just before a big pitch to a new client, Robin’s forced to make the pitch. But Robin can tell that the main client and architect of the building, Paolo, takes an instant dislike to him, and Robin doesn’t pull any punches in giving him a piece of his mind. He figures that he has lost them the new client and puts off telling Bobby.

Bobby ends up going to the doctor for his cold and finds that his doctor has been replaced with his gorgeous gay son, Micah. The twins are both attracted, but Bobby can’t stop talking about him and wondering about him. When Bobby finally calls to find out if they got the job, they are pleasantly surprised to find out that they did win the contract. However, the client’s stipulated that Bobby’s to be the main painter for the job instead of Robin. And so they decided to switch places so that Robin can still paint the mural while Bobby sells their other paintings at the Festival. Robin gets to know Paolo while trying to impersonate his brother as he works on the job and Paolo ends up wanting to go out with “Bobby.” Dr. Micha Brown also wants Bobby, but because of his homophobic brother, he ends up asking out Robin instead. They end up realizing that they’re meant to be friends only, and Micha ends up asking out Bobby.

They’re the perfect couple, and their relationship moves quickly, leaving Robin feeling left out and lonely. Paolo also has a date with the real Bobby and is confused with how different he is from the Bobby he talks to when he’s painting the mural. And Bobby doesn’t feel any connection to Paolo either. Making Paolo realize that the twin he really wants is Robin. But it’s not all fun and games, and Paolo and Robin will have to work hard for their HEA. I greatly enjoyed getting to see cameos of the other guys in the Balls to the Wall series and how great their relationships are doing. Bleu Balls is a great addition to the series. My only issue is that the story ends kind of abruptly, and I wanted to know more about Bobby and Micha’s relationship after they got together.