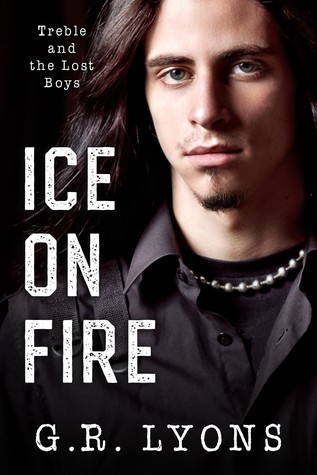 Zac Cinder is on the verge of making his dream come true. His punk rock band, Inferno, might have a shot at an audition for a record deal. Fame and fortune would mean he could finally help his parents. They’d raised eight kids in a loving household while barely scraping by, so Zac is determined to give back in any way he can.

Keeping Inferno together, though, means keeping his biggest secret. His bigoted bandmates would drop him in an instant if they found out Zac was gay.

Then he meets Adrian Frost, and Zac can’t resist the shy man. Adrian gives up everything to be with Zac, but Zac can’t bring himself to do the same. He doesn’t want to lose Adrian, but he can’t give up Inferno, either. Not when he’s so close to realizing his dream.

When one cruel decision rips Adrian from his life, Zac will have to decide if ambition is worth the price of the greatest happiness he’s ever known.

(Note: This story takes place in a fictional world, the same as in the Shifting Isles Series. There are multiple gods, different names for the days of the week, etc. A glossary is included.)

WARNING: Contains scenes of self-harm that may be disturbing for some readers.

This author has amazed me again. He’s a definite must buy immediately for my book collections. I love how this author writes about real life issues that tug at my heartstrings. He really tells a story with real-life problems, consequences for their choices (good or bad) and has solutions with usually happy endings. Warning, this book does have self-harm and can be a trigger for some people. The way G.R. describes each character and the way they feel, I find myself holding my breath for them or crying with them and laughing with them. I found myself angry at some of the characters and falling in love with others. Getting frustrated with them and would yell at them, like they could hear me.

First, we meet Zac, aka Blaze. Zac is a very talented musician and leads a double life. As Blaze, he plays his electric guitar with his two childhood buddies in a rock band. And they are good and getting more and more recognition. Then he plays his violin for Treble at Underground. Playing the different styles can get to be a pain in the arse, but he loves them both so much. But playing at Underground has given him new inspiration. The man that sits in the back corner and can’t take his eyes off Zac. No one knows Zac is gay, but Zac must meet this guy, and after each show, the mystery man disappears.

Adrian Frost is the only son of the very wealthy Sebastian Frost. Adrian has huge social anxiety and has to take pills specially formulated for him just to deal with college. But he manages to get to the lounge anytime that Treble’s playing and gets lost in the violinist’s everything. His petite body, the long braid, how the suit he wears fits him so well and the music. He loves the whole package, but every time the show ends, he leaves so that he doesn’t talk to anyone including the violinist.

Well, they end up being in the same college and at the same table in a class. When Zac recognizes his dark shadow, the endless flirting begins. Adrian doesn’t know how to take all this. His father has kept him away from the reality of the real world and is a homophobic prick. These two are total opposites but are so good together, if they can figure things out. Zac has friends that are homophobes too, and trouble lies ahead for these two.

I can’t really say more, but I will say this—I rooted for these two from the get-go. Can these two come to terms of who they really are and not care what the world thinks? Will they get through the hardest times of their lives? Will they let the world conquer or will love? I can’t wait for the next book.