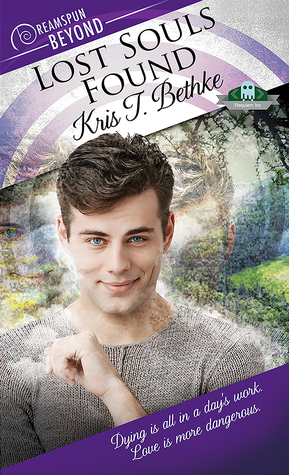 Dying is all in a day’s work. Love is more dangerous.
Ghostwalker Sam Jones has been half in love with Michael King since he started working at Requiem Inc. But Michael is his boss and a Guardian, to boot. Sam thinks they could make it work anyway, but Michael uses his position and his age to keep Sam at arm’s length.
When Sam continues to volunteer for the most dangerous cases, Michael has to intervene. He tells himself he’s just doing his job, but he’s always seen Sam as more than another operative, and he can’t bear the thought of not taking his chance. The connection between them has been strong from the beginning, and Michael’s telepathy adds unexpected depth and an edge to their new romance, but working together while they try to build their relationship might be the hardest part of their job if they don’t make some sacrifices.

Lost Soul found is book 2 of the Requiem inc series.
Sam Jones is a ghostwalker. That means he dies every day, goes to the spirit plane (or afterlife) and helps lost souls to cross into the light, and he comes back to the living plane (us) and needs his anchor to take care of him. It’s his job.

Michael King is an anchor and a guardian. He’s the one in charge of all the operatives (ghostwalkers and anchors), he’s the one who kills and bring back all the operatives.
Sam has been in love with Michael for the last decade, but Michael, as attracted to Sam as he is, refuses to have a relationship with him, he denies his attraction for him, and hides behind their job.

How can they have a relationship while working together with Michael being Sam’s boss? That’s what they’ll have to find out.
After the beautiful Ghost of a Chance  I was more than happy to read this second book.
Sam is funny, smart, stubborn and determined to have Michael. He was patient for ten years, until he couldn’t take any more rejection from Michael. I loved Sam. He’s really sweet, smart and nice. He’s funny and stubborn too. I loved how he keeps pursuing Michael because he knew that they were meant to be together.

Michael is hot, powerful, protective and possessives. He’s wanted Sam from the beginning, but he refuses to abuse his authority by being with him. He hides behind this excuse for years until he almost lost Sam, so he maned-up, and confesses his fears and his attraction. I really love him, he is a super-hot, very Alpha type, but at the same time very caring. He loves taking care of Sam, and it’s killing him to have to let Dom (Sam’s anchor) doing this instead of him. I love that he’s confident enough to admit when he was wrong and doesn’t hesitate to beg for forgiveness. No, really, this man is pure perfection (hello new obsession).

This book was different from book 1 and can be read as a standalone. The author did a good job with this book, Sam and Michael are adorable, the plot is only about them and their relationship, it was good and funny sometimes to read how they built their life together.

It’s confirmed the author’s talent and for me to keep following this series.

4 OptimuMMs for the Guardian and his love.