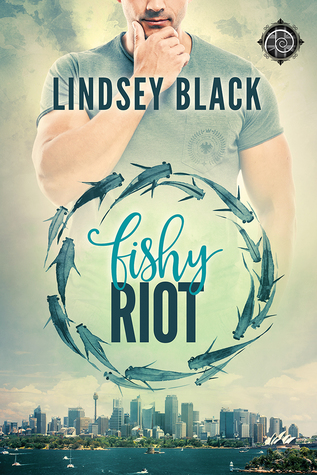 Most people think riot squad officer Taylor Jameson is an asshole. Little do they know his apparent indifference stems from having a meddlesome family always butting into his business. And little does Taylor know he’s about to stumble into a situation that’ll make indifference impossible.

When everything goes horribly wrong at a political rally on a harbour ferry, Taylor encounters Sietta Salisbury. The son of a wealthy politician, Sietta is a revered—but presumed dead—musician, and an enigma who is so strange, Taylor is compelled to look into his background. What he discovers draws him into a bizarre mess of prisoners, politics, and attempted murder that makes him realise what he’s been missing.

Falling in love isn’t hard. Trying to convince someone else you’re worth loving despite your crazy family and the people trying to kill you? That’s a whole other can of worms.

My first read from this author and damn if she isn’t good!

This book it’s not what I was expecting. It surprised me in a good way.

Taylor and Clay are twins, attached at the hip. They both work in law enforcement in Sydney being members of the Riot Squad. They are big, like huge-big. They think alike, walk alike and breath alike. When you look at them, you think you are drunk, and you’re seeing double. Clay is in a relationship with Joel, a university professor, but the twins find time to be with each other. But this book is not about their relationship though…

Taylor is an asshole, everybody said so (shhhh…he isn’t). But his mind works differently than others. Where others see sympathy, he sees logic. He’s a rational man, with rational thoughts, although for some people it may appear as asshole-ish behavior. When a mission brings them to a fundraiser party on a ferry, his life changes definitely. He meets Sietta Salisbury, with his Gucci glasses. Taylor’s lost…

Sietta Salisbury’s family is powerful, his father’s in politics and they are the epitome of high class. But people thought he’s dead. He isn’t. Well not technically. Sietta is strange, a perfect match to Taylor, and it seems that he can get Taylor where everybody else fails. And Taylor sees him where everybody does not.

I can’t go into detail, for not spoiling it for you, but the story is more than worth reading it. Your heart will break for Sietta, and you will laugh out loud when you’ll meet the Jamsons. They are hilarious, funny and borderline crazy.

This book is a fun read, full of emotions but not overwhelmingly so. I really enjoyed it and I would very much like that this would become a series! I would have loved to read Clay and Joel’s story too, there is so much potential for other couples…

One thought on “Review: “Fishy Riot” by Lindsey Black”